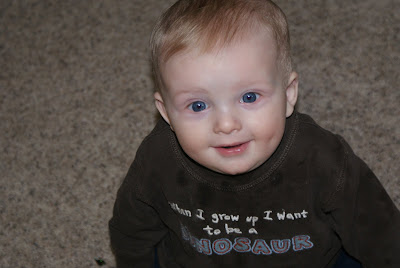 Giggles and Smiles and MA MA MA. Babbles and Grins and BA BA BA. A need to shove everything in his mouth. Can out eat his sisters when it comes to bananas. Squealing, well maybe more like shrieking, for no apparent reason other than to hear ones voice. Nicknamed
Pterodactyl because of it. Loves to dive at objects that he sees (which is anything and everything, we think he might be an olympic diver. Gabber mouth first thing in the morning. Joy in seeing his sisters. Crying in the reality that he is being hugged to tight. (Courtesy of Maddie). Smiling at his own reflection. Army crawlin' it. Loves to bang on things, enrolling him in drum classes. Has discovered Ice Cream. And getting quite efficient at it. So easy to tickle. Loves my singing, it makes him laugh. Especially rap. A preference for paper that I have to dig out of ones cheeks. Dislikes sitting still, can anyone say ADD ? Partial to remote controls, phones, computers, ipods, chords. AKA - the geek !! Precious, handsome, a ray of sunshine, and above all my baby boy. Love ya.
Posted by Mindi at 3:10 PM No comments: 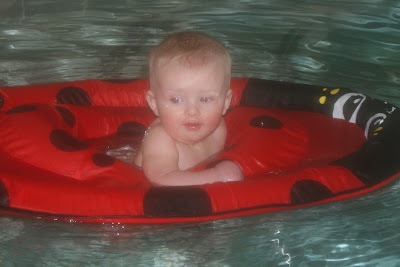 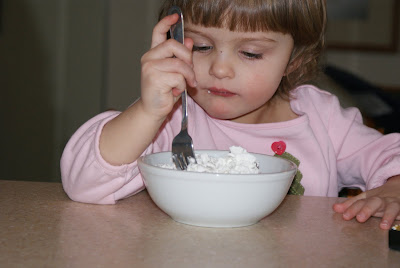 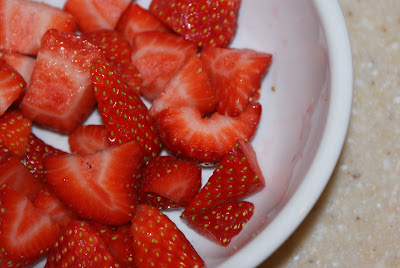 Last week Patrick was not in school or working at Deer Valley so we decided to spent some time up in Park City. It started on Thursday - Patrick took Katelyn up skiing for half the day and then came back and went to work. Then I packed up and me and the kids headed up to check into the Condo for the night. We stopped at our favorite place to eat in Park City (Nacho Mama's) and then it was on to the condo. They had an indoor pool so we took the kids swimming and they loved it. The pool was surprisingly warm. Noah loved the water, he slapped the water with his hands and was in heaven. The girls had their life jackets on so Katelyn would go out in the pool and float around. Maddie was to scared to go into the middle of the pool but made her way around the edges. Patrick joined us about 8:30 that night and we put the kids to bed and I enjoyed some time in the jacuzzi tub. The next morning Patrick and Katelyn hurried out to grab some breakfast at Deer Valley and then to hit the slopes. Me, Maddie and Noah lounged around for a little while and then I started to pack up.

Noah has been a little sick and so he was being very fussy. I was trying so hard to keep him happy and to hurry and pack up and take everything out to the car so that way he could have a nap in the car and Maddie and me could find some breakfast. Well he was crying so hard that I had to put him down for a nap (much earlier than usual). So the only thing we had to eat were strawberries, eggs, and whip cream. So I cut up the remaining strawberries, added some whip cream, made some scrambled eggs and we had a make shift breakfast. It 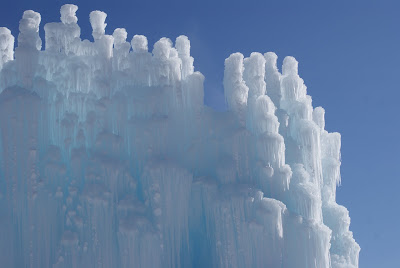 would have to do till we ate at Deer Valley with Patrick and Katelyn.

On the other side of the street was the Zermatt Resort where they had these beautiful ice mountains ( i guess that is what I could call them). The girls were amazed by them. I think they are over some hot springs because there was steam coming out of them.

So I woke up Noah to go meet Patrick and Katelyn for lunch at Deer Valley. They have wonderful food there and Katelyn's favorite is the chocolate cake. Noah had his first french fry and kept wanting more. I think he liked them !! It was time to head home for the day. The next morning (Saturday) we
dropped Noah off at Grandma's and all four of us headed up for a day of skiing. It was Maddie's first time on ski's. The first time down the hill she did not like it at all, I think she got to scared.
But the next time she had so much fun. She said to me " look mommy I geing - instead of skiing. And she kept saying " I geing, I doing it ". So cute. She stopped all by herself a few times and I was so proud of her. Katelyn is doing great. She can stop and is getting better and better at turning. She is going to be a great little skier. We all had fun and can't wait to go again. It was a great week and I loved spending time with the family. 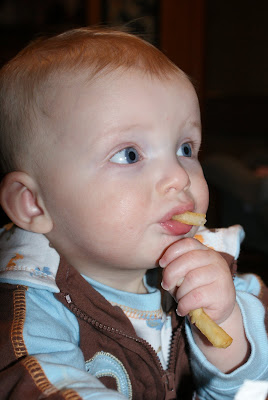 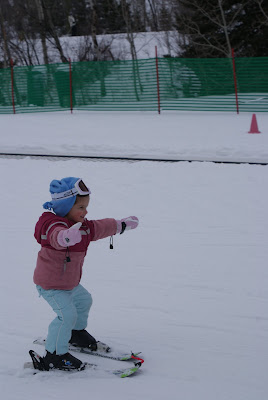 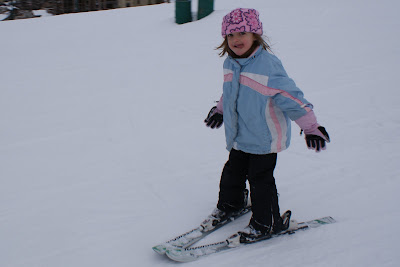 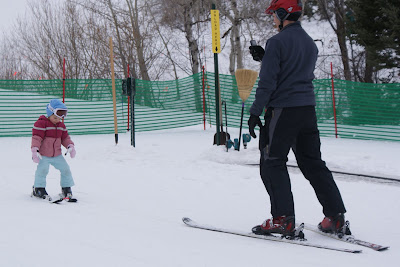 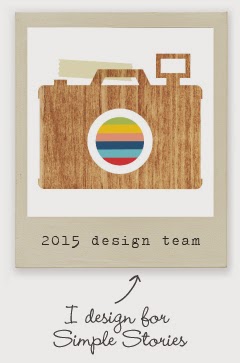